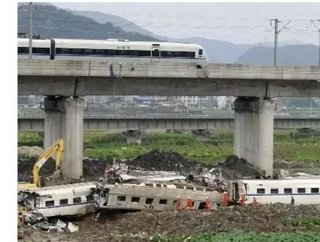 Last month, tragedy struck a Chinese high-speed rail line, as one bullet train crashed into a hopelessly stopped train on tracks near the city of Wenzh...

Last month, tragedy struck a Chinese high-speed rail line, as one bullet train crashed into a hopelessly stopped train on tracks near the city of Wenzhou, killing 40 people and injuring 191. The collision had been blamed on a design flaw in a railway signaling device.

When asked why rescue workers had saved a live toddler from the train wreck several hours after the rescue attempts had been officially called off, Yongping answered that it was “a miracle of life.”

When asked why workers decided to bury a train car at the wreckage site before an official investigation had started, Yongping answered that the wreckage had to be cleared to aid rescuers.

“Whether you believe it or not, I believe it anyway,” he told reporters.

The train crash was the first fatal crash involving bullet trains in China, and the second deadliest high-speed rail crash in the history, behind the 1998 Eschede train disaster in Germany that claimed the lives of 101 people.

A couple months ago, China’s flagship bullet train line between Beijing and Shanghai experienced a series of power outages that additionally shook confidence in the transportation service.

The Chinese railway ministry has come under fire for reports of corruption, and is facing fierce criticism over the Wenzhou train crash. On Tuesday, the railway ministry admitted on its Web site that the management of the construction of its high-speed rail network was below standard.