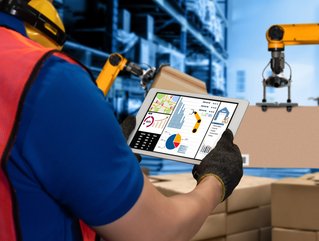 The tall robot extends upwards, standing at over four metres. It pulls out a plastic tote box and flexes back down to place it on a lower shelf, before withdrawing. Then a shorter robot rolls up, withdraws the tote, turns around and delivers it to a human staff member.

All around in the warehouse the scene is repeated – multiple robots carrying out different tasks simultaneously never bumping into one another. Yet they were made by different manufacturers and use different operating systems.

What keeps the warehouse functioning smoothly - processing orders quickly and efficiently - is not hardware, but software.

Developed by Chinese smart-logistics start-up CoEvolution, the software platform is able to communicate with all the different systems in the warehouse, giving it what CoEvolution’s 39-year-old founder Lijun Zhu calls a “God’s eye view”, which then allows it to orchestrate all the different robots, setting them tasks proactively while also ensuring they don't get in each others’ way.

“The robots don’t communicate with each other, they communicate with our platform system,” says Zhu. “We have an open-platform that can coordinate with different kinds of robots. It’s very hard to do actually, but we built it.”

He says the increasing availability of relatively low cost and reliable robots means that the software element will be what distinguishes the best logistics solutions. He anticipates a “big trend” in adopting robots in logistics.

The warehouse described above is in the southern city of Guangzhou and belongs to a leading MRO supplies distributor MYMRO, the former China subsidiary of Grainger.

In order to deliver a premium customer experience with adequate inventory, the warehouse keeps hundreds of thousands of products in stock. By using CoEvolution, the company was able to stock most of its inventory on high shelves and thanks to order data the robot control system would automatically move the in-demand products down to lower shelves ahead of time so they could be picked for dispatch by the other robots. This means the warehouse picking area can be halved while also cutting human labor by about 50% too – significant savings.

“The analogy is like a computer hard drive and computer memory. You have most of your inventory on high shelves, like all the data on a hard drive. But then when you need it you load it all into your memory, which is the lower shelf level and the other robots will bring the products at that lower level to the human operator. It’s highly efficient and high density,” says Zhu.

It may be a software solution but Zhu says it was born out of long hours spent visiting the MYMRO warehouse and seeing how it works – and before that years of experience learning the “pain points” in the logistics industry. Zhu has had an interesting career – after obtaining a Ph.D. degree in the US he went to investment bank Goldman Sachs before moving to Amazon and working on supply chain optimization, which first sparked his interest in logistics. His interest in the internet then saw him move to Facebook after which he returned to China and started at Alibaba’s logistics arm, working on integrating artificial intelligence and machine learning into logistics. In 2019 he left the Chinese e-commerce giant to found CoEvolution.

“So it’s a very traditional field, you move real things around with very interesting and advanced mathematical models and software. I could see the value in that, you’re making an impact on the world, on real things,” he says.

“But my experience in the internet industry is also valuable because that gave me the impression that by applying advanced techniques you can create a lot of value.”

Zhu is at pains to emphasize that creating a robot control system is not like dreaming up an algorithm to use online. Working in the real world means unforeseen problems that the platform has to be robust enough to absorb and keep functioning. Too much complexity and sophistication can be as damaging as too little.

“You have to really go to the warehouse, work with the people, get really tired and encounter all these different problems and then you understand how to control the right level of complexity, the right level of sophistication in your models.”

Long Wong is a satisfied customer. He’s the founder and chairman of ProA Supply Chain, the logistics subsidiary of China’s leading beauty brands e-commerce enabler eBeauty Group (also known as UCO Cosmetics), which was responsible for over $3bn worth of cosmetics sales last year.

The MIT-trained Wong says ProA initially tried using automated guided vehicles (AGVs) to bring goods from shelves to warehouse workers in 2018 but was disappointed by the standard black-box implementation. Workers had to wait a long time between picks and the AGVs did not integrate well with other warehouse processes. The overall result, he says, was a warehouse that was 20% less efficient than the equivalent manual operations.

“I believe CoEvolution’s technology is unique,” says Wong. “Not only does it integrate robots from multiple vendors, it also actually orchestrates the tasks and movements performed by the robots. I believe this will be the future of warehouse automation.”

Communicating with different robots is one thing, reacting to change is another – and this is where Zhu says his experience in artificial intelligence and machine learning comes in.

Change is hard in logistics, which requires planning – an e-commerce firm might plan a logistics chain to last about three years and then find that after a year the business has changed, he says. Third party logistics providers are even more exposed – one day they might be providing warehousing solutions for consumer packaged goods, the next day it might be electronic products.

“It really exemplifies the biggest pain point for customers and technological providers. You give the customer your solution and then a year later it has all changed, it’s really a headache,” he says.

That’s why CoEvolution puts most of its effort into developing the software’ ability to react to change rather than predict it, Zhu says.

For example a typical warehouse might have an area with wide aisles where the hottest products are stored, making them easier to access. If customers then switch en masse to buying something else, say as the result of celebrity endorsement, everything is suddenly in the wrong place. But CoEvolution’s software platform can respond as soon as order data starts arriving by reshuffling inventory so that the in-demand products are in the right place to be picked at speed. This happens automatically and doesn't require human intervention, Zhu says.

So far it’s a solution that works well for both e-commerce and traditional retail distribution in China, where demand fluctuated more widely than in the US and Europe – at least until the Covid pandemic hit, upending supply chains and causing a surge in online buying in the West.

For Wong, the Chinese experience offers valuable insight – “Supply chain professionals in the West can take advantage of the hard lessons we have learned and leap forward by leveraging the software and hardware that have been developed in China.”

Meanwhile Zhu is eyeing new markets – CoEvolution is working on a project in South Korea and wants to expand further afield – as well as different business sectors and the latest advances in robot technology.

He wants to integrate the platform with other kinds of automated equipment such as robotic arms. Technologies such as computer vision could be applied in warehouses, he says, with robots recognizing and picking individual products rather than boxes at a location.

Explaining to prospective customers what CoEvolution does is a challenge, he says, because it can be hard for them to conceptualize. But he is confident the firm will prove its value.

“To have a solution that’s that adaptive is the future – that provides the core value to the customers,” he says.

“We used to be in that industry, we feel the pain. All your plans are disrupted and you have to re-plan everything. It’s very hard and tiring. We are trying to solve that problem with our technology.”

Hill Thurber is an independent producer at BBC. Back in 2008, in his early days as a journalist, he lived in China. He is based in London.