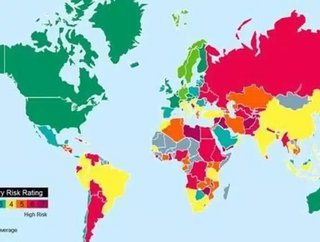 The risk in global supply chains is on the rise, according to the Chartered Institute of Procurement &amp; Supply (CIPS) Risk Index. The figure is the h...

The risk in global supply chains is on the rise, according to the Chartered Institute of Procurement & Supply (CIPS) Risk Index. The figure is the highest since 2013 and has been driven by increases in supply chain risk in Western and Central Europe, Eastern Europe, the Middle East, Latin America and Sub-Saharan Africa.

The index is produced for CIPS by Dun & Bradstreet economists, who track the impact of economic and political developments on the stability of global supply chains. The upward trend in supply chain risk is in part driven by a disintegration of the political consensus over globalisation, with the World Trade Organisation reporting an average of 22 new trade restrictive measures a month in its latest report.

This trend is clearest in Western Europe, where risk rose to 2.63 in Q3 from 2.60 in the previous quarter. The uncertainty around the post-Brexit relationship between the UK and the European Union has had a negative impact on trade and business sentiment in the UK and across the region. In the UK, the resulting currency volatility is having an immediate effect on British businesses with suppliers starting to push up prices in reaction to the weaker British pound. A brief stand-off between Tesco and Unilever looks to be only the first of many challenging negotiations for British procurement teams.

Elections over the next 12 months are expected to see gains for populist parties with France’s National Front, Italy’s Five Star Movement, the Freedom Party in the Netherlands and the German Alternative for Germany all sceptical of European integration and hostile towards free trade. An agreement between Turkey and the EU to manage the flow of migrants from the Middle East has seen some temporary border controls within the common market repealed this quarter, reducing supply chain disruptions. However, with the military situation in Syria worsening and anti-immigration parties gaining momentum, European supply routes remain uncertain.

Supply chain risk in North America remains static at 2.101, but both Canada and the USA have seen trade agreements with the European Union stall this quarter. Regardless of the result of the US election, both Donald Trump and Hilary Clinton have expressed concern about the Transatlantic Trade and Investment Partnership (TTIP), while in Canada the Comprehensive Economic and Trade Agreement (CETA) has been derailed by a regional parliament in Belgium.

Persistently low commodity prices, are deepening the cash flow crisis for oil exporters in Eastern Europe and Central Asia, the Middle East, North Africa and Sub-Saharan Africa, damaging payment performance and heightening risks for supply chains which pass through. In Eastern Europe and Central Asia, risk has risen to 5.424 from 5.396, following a failed coup in Turkey which is likely to see an increase in interference with businesses. Supply chain risk has also deteriorated in the Middle East and North Africa from 4.406 in Q2 to 4.413 in Q3, where civil war has all but eliminated international supply chains in certain countries. Finally, Sub-Saharan Africa continues to have the world’s highest levels of supply chain risk, increasing further from 5.544 to 5.558 with Nigeria slipping into technical recession and South Africa narrowly avoiding one.

Asia Pacific has bucked the trend this quarter with supply chain risk decreasing marginally from 3.424 in Q2 2016 to 3.415 in Q3. Australian suppliers, in particular have benefited from rising coal and iron ore prices together with an increase in national defence spending. In the short-term, Australian businesses are showing improved payment performance, but the country’s reliance on temperamental Chinese demand continues to pose risks.

Elsewhere in Asia, logistical routes have come under pressure. Super typhoon Meranti has caused disruption to flights, ports, rail schedules and power supplies in Taiwan. Winds of 150km/ have forced the temporary closure of two nuclear power stations but the country’s robust building code has mitigated against long-term disruptions. In South Korea, meanwhile, the world’s 7th largest shipping company, Hanjin Shipping, went bankrupt in August, reducing global shipping capacity by 3% and leaving a cargo as large as $14bn unable to dock. The bankruptcy is likely to have wide-ranging impact on trans-Pacific and Asia-Europe supply chains.

John Glen, CIPS Economist and Director of the Centre for Customised Executive Development at The Cranfield School of Management said: “Supply chain managers are facing a new wave of impediments to the flow of goods across borders.

“With international trade deals under threat around the world, supply chain managers must be as aware of political risks as they are of natural disasters and economic hardship.

“Skilled supply chain managers are adept at managing the short term supply chain disruptions but with supply chain risk returning to record levels, businesses must be continually vigilant in vetting their suppliers and preparing contingency plans.”