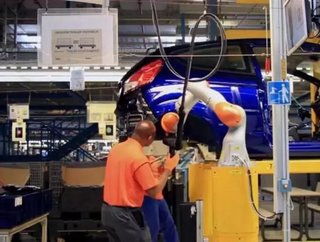 Ford Motor Company is trialling the use of collaborative robots, nicknamed &lsquo;cobots, in its Cologne assembly plant. The robots are being used to h...

Ford Motor Company is trialling the use of collaborative robots, nicknamed ‘cobots’, in its Cologne assembly plant.

The robots are being used to help workers fit shock absorbers to the company’s Fiesta model. Ford sought feedback from over 1,000 production line workers to identify which tasks its new robots might be best suited to performing. Employees on the assembly line use the robots to lift and position the shock absorber.

“Working overhead with heavy air-powered tools is a tough job that requires strength, stamina, and accuracy. The robot is a real help,” said Ngali Bongongo, a Production Worker at Ford’s Cologne plant.

The co-bots are equipped with high-tech safety sensors which allow them to stop in their tracks if they detect an arm, or even a finger, in their path. German manufacturer KUKA Roboter GmbH worked in partnership with Ford to develop the robots.

Currently, the co-bots are installed in just two workstations, but the company says that it is reviewing an extension of the programme and may expand it to facilities worldwide.