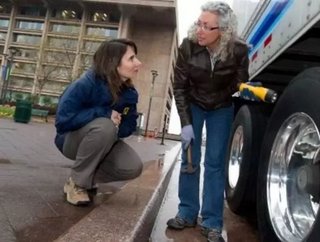 Bert Johnson, Vice President of Human Resources at Con-way Truckload, which provides regional and long-haul full-truckload transportation throughout North America, said: “Professional truck drivers fuel our economy and are committed to the highest standards of safety. This series will provide a view into the lives of some of the most accomplished drivers in our industry, and hopefully break down some of the negative stereotypes of truck drivers while also educating people about a viable and rewarding career option.”

The series will be featured on both Con-way Truckload’s and Con-way Freight’s YouTube channels, with regular new episodes filmed by Daly and Klang in their daily routines.

Terry Riordan, Director of Human Resources at Con-way Freight, which has over 400 locations across North America, said: “Truck driving can provide a variety of career paths, depending on a person’s aspirations and experience. Whether it’s interacting with customers daily on pickup and delivery routes or moving freight at night between cities, these are solid, reliable jobs that support thousands of families. Professionals like Ina and Stephanie prove that women not only can be successful in this business, but can reach the highest levels of performance excellence and achievement.”

View the introduction video and follow the series here: http://youtu.be/Nl7GxSBA-N0.

Both Daly and Klang have served as Captains of the American Trucking Association ‘America’s Road Team’ a prestigious group of the industry’s safest drivers who serve 2-year terms as industry safety ambassadors promoting highway safety.

Both also have surpassed 2 million consecutive, accident-free miles in their careers and have been honoured by Con-way with the CEO Constellation Award, which is the company’s highest employee award for professional accomplishment, leading by example and demonstrating the company’s core values.
Con-way is a $5.5 billion freight transportation and logistics services company headquartered in Ann Arbor, Michigan. The company and its subsidiaries operate from more than 500 locations across North America and in 20 countries worldwide. For more information about Con-way, visit www.con-way.com