If you’re a motorcycle enthusiast, KTM Group will be a company firmly on your radar. Offering everything from trailblazing street bikes to dirt-shredding motorcycles, KTM has earned its reputation as Europe’s largest motorbike manufacturer and now, on the road ahead, it has its eyes firmly set on a new horizon: Asia.

One integral player at the heart of this expansion is Luca Martin, Managing Director at KTM Asia Motorcycle Manufacturing Inc. Martin is a seasoned professional when it comes to two-wheeled vehicles: he started his career as a mechanical engineer, specifically working on vehicle engine development where he used artificial intelligence (AI) to optimise mechanical components. His next career move saw him at Ducati. “I helped to create the complete supply chain of Ducati in Asia from scratch,” Martin recalls. “We had to find new suppliers, develop new components locally to optimise the factories out there.” This was no mean feat, but Martin helped to establish Ducati’s Asia presence and therefore when KTM Group readied itself to enter the Asian market, Martin was an ideal candidate for the job.

As part of this ambitious strategy, the company forged a US$2mn joint venture with Ayala Group’s offshoot Adventure Cycle Philippines Inc and a new subsidiary, KTM Asia Motorcycle Manufacturing Inc. (KAMMI), was born. Today, the company produces bikes such as the KTM 200 Duke and RC 390 at its state-of-the-art manufacturing facility in Laguna, right in the heart of the Philippines, offering the perfect springboard for KTM Group to enter Asia. “We started production for both local and export markets just over a year ago and we are already producing more than 7,000 units a year,” enthuses Martin. “We have big hopes for the Southeast Asian market.”

Tackling a new location is a challenge for any firm, but with its strong local partnerships, KTM Group has been able to hit the ground running. “Thanks to Ayala’s support, we’ve been able to start production in a very short time: we’ve been able to move from a startup to a scaleup company,” Martin observes. “They really helped us establish strong relationships with local suppliers and this is one of the key advantages of setting up this joint venture.” As one of the largest and most diversified business groups in the Philippines, Ayala Corporation is present in markets including real estate, banking, telecommunications, water, power, industrial technologies and more. This has allowed KTM Group to gain a deep understanding of the Philippine market.

Entering this new market was a challenge from a supply chain perspective as it meant developing a new network from scratch. However, this is a challenge that KTM Group has taken head on. “Many Asian companies and suppliers are used to working in the automotive segment and they’re used to helping manufacture millions of cars every year. Our challenge is to help the supplier understand that by working with a well-known brand, there’s more opportunity to grow. In the long term, we hope to increase our more and more bikes.” In doing so, KTM Group is not only helping to meet the burgeoning demand for its motorbikes, it’s also helping to boost the local economy and generate employment for more Filipinos. “Many of our suppliers are small- and medium-sized enterprises (SMEs),” explains Martin. “By working with us, they get the chance to grow not only in terms of revenue, but also in terms of qualities and process.”

Always keen to race ahead, KTM Group has also sought to digitalise its supply chain. “We’re finding new ways to get in contact with suppliers,” Martin says. “In the past, we used to get hundreds of emails every day with different company profiles and most of the time I simply didn’t really have the time to physically go through all these potential prospects. Now we are working with some partners in Asia to develop a supplier rating platform where each and every supplier can log in, create a profile and get feedback about their performances. I think this digital approach is important for the future of procurement.” Data is probably one of the most powerful tools that supply chain professionals have today, however whilst technology is set to disrupt the sector for good, Martin affirms that a human approach is also vital. “If we want to build a very strong relationship with suppliers, I think it’s important that we visit them. We need to create a face-to-face relationship,” he asserts, “but at the same time, I think that digital platforms can help buyers be more productive because they can count on reliable data to select suppliers.”

As well as developing a new supply chain, KTM Group also had to contend with the challenge of getting the right talent and expertise on board, however when your brand is one associated with adrenaline and speed it seems that finding employees who are passionate about the product isn’t too difficult. “We’re lucky that we produce a product which you could call an entertainment product so you can tell talent, ‘Look, if you are passionate for the motorcycles, we are producing one of the best that you can find in the market’,” says Martin. “This is a very valuable retention tool. A lot of KTM employees are passionate about motorcycles or are even professional riders. On the other hand, we do believe that this isn’t the only thing we offer. We also try and onboard local people who believe in our values. If we want to be successful abroad, we need local talent because only they can help KTM better understand the local culture.”

The Philippine plant is KTM Group’s third manufacturing facility, with its first located in its home country of Austria and the second in India. In selecting Asia as a key market, Martin contends that as the group ramps up its production, the Asian market will play a key role in its future growth strategy. “KTM Group has recorded record volume production eight years in a row. Every year we’re producing more and more bikes and in 2018, we saw a total sales increase of about 10% to 261,000 motorcycles. KTM is one of the most well-known brands for off-road in North America and in Europe we are now one of the biggest OEMs (original equipment manufacturers) but the future growth of KTM Group cannot be as strong without Asia.”

KTM Group’s reputation precedes it. To disrupt the Asian market KTM Group will undoubtedly rely in on its race-proven success. Its distinctive orange motorcycles have crossed the winning line at 18 Dakar Rallies in a row and KTM racers have gained 281 world championship titles up into now. Martin wants to bring this same world class quality to Asia. “We want to show the Asian market that KTM represents quality and more importantly, we’re ready to race. We want to bring this racing spirit to Asia and we truly believe there will be a bright future for big bikes in this market.” The firm won’t just rely on its legacy though: it’s keen to invest in new innovation so that it can create the best race machines in the market. “One of our biggest competitive advantages is that we try to transfer what we've learnt from offroad in terms of product quality and ease of maintenance and bring that to our street bikes. We always want to be always on top of technology.” KTM Group has also shrewdly kept track of emerging trends in the motorcycle space. For instance, whilst the firm noticed a dip in demand for superbikes they tapped into the growing uptick for smaller bikes. “This was a strong move by KTM,” notes Martin. “We focused on smaller displacement bikes but our competitors didn’t.”

Just as consumer demands are shaking up the market, the rise of electrification could always change the motorcycle market for good. “We are now in an era of new mobility,” Martin asserts. “We truly believe that sooner or later they will be a move to electric motorcycles. We have been developing off-road electric bikes for many years already. We’re seeing a shift in that direction and we want to be part of this movement.” This market swing won’t come without its challenges though. Whilst the weight of a battery may only slightly alter the performance of a car, it can “completely change the handling of a bike”, according to Martin. “This is a challenge but with the right partner we will be able to prepare for this shift.”

Looking ahead, the future is bright for KTM Group. The firm has cemented its position as Europe’s largest motorbike manufacturer, and now Asia’s motorheads need to look no further if they want to get their hands on a high-quality race machine. 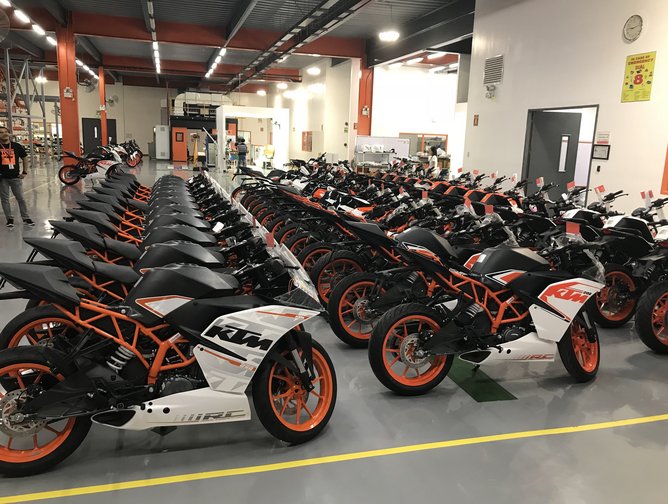 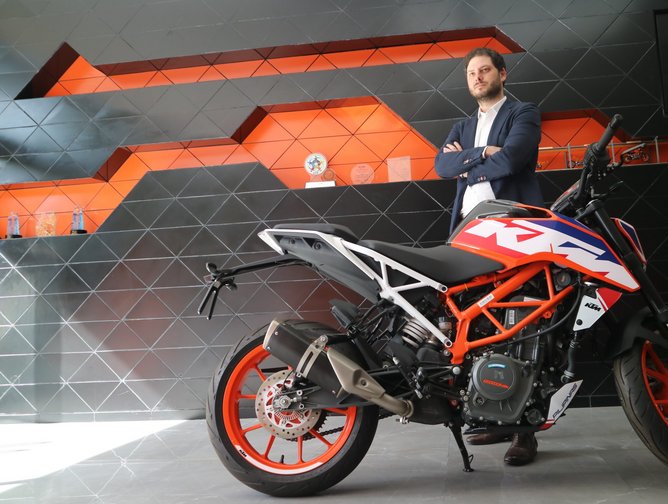 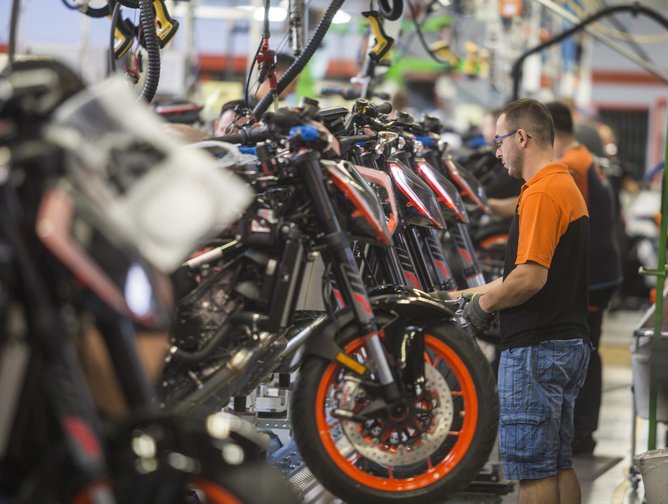 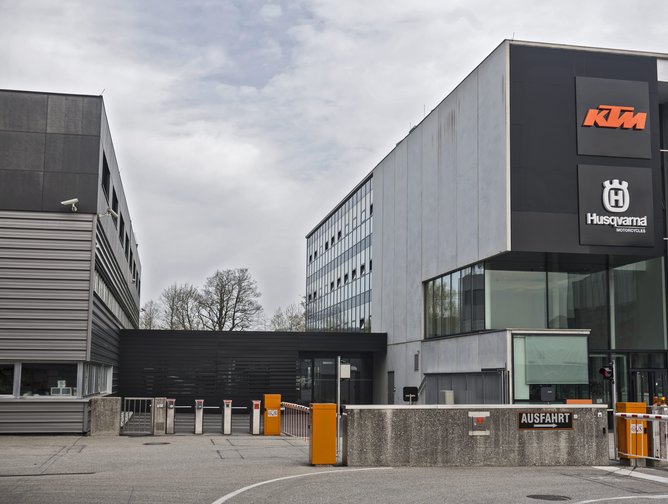