View Full Report
Simon Robinson, Head of Supply Chain, PNG, details the transformation that has returned Coca-Cola Amatil to growth in the country...

CCA has been operating in PNG for 28 years with a Supply Chain network consisting of two plants, five production lines, six distribution centres, 40 products and 800+ customers. Despite strong consumer demand and high market share, volume growth stalled primarily due to an inability to supply. Internal process issues across manufacturing efficiency, inventory accuracy, planning and logistics were inhibiting growth and the supply chain had become a growth inhibitor.

To resolve these issues, the business implemented a back to basics operational excellence framework. Supported by a team of subject matter experts from Indonesia, sponsored by Gigy Philip, Supply Chain Director (Indonesia) and led by Agus Salim, Technical Manager (Indonesia), who focused on optimising the end-to-end supply chain. “One issue was just around process and control, trying to give some structure to all of the basic processes that are required to run a supply chain,” says Robinson. “Implementing daily stand up meetings, control boards and disciplined routines was an important part of the program. Implementing controls around raw materials ordering, demand planning, procurement and inventory management, was important to stop the leakage of profit out of the business.”

A major focus for the team was on operational excellence within manufacturing. “There was a dedicated team working on building local capability, optimising the equipment and upgrading utilities within manufacturing to get the lines operating at the speeds that they're capable of running at,” says Robinson. “That was the real crux of the way we've changed the business around. In a business where, historically, demand exceeds supply, every 1% improvement in operational efficiency goes straight to volume and revenue. Improving the efficiency of those lines was the major driver of the growth in 2019.”

Robinson credits the introduction of the small team with injecting a new level of energy and enthusiasm. “The guys could see, on a week-to-week basis, the improvements that they were making, and it wasn’t led by management, it was led by this small group of subject matter experts.” In the end, he says, “it was about collaboration. Each function had been working in a silo and we had poor relationships with suppliers. The creation of that collaboration and interdependence of all the functions as well as improving partner supply agreements enabled a business turnaround. Now, almost 12 months later, operational efficiency has improved around 15%, driving an even higher growth in volume and revenue in a relatively flat economic market.”

Operations weren’t the only piece of the puzzle, however, with a focus on culture also prevailing. “We did a lot of work around engagement in a bid to bring people together,” says Robinson. “We had a philosophy of ‘one team, one goal, no limits’, and that became a theme which was able to galvanise everyone in the organisation. We were obviously trying to achieve volume and revenue targets, but it was also about regaining respect and pride in the business from both our suppliers and our people.  The process also involved reaching out to engage those who had previously been ignored. “We started to conduct town-halls where we listened to the people in order to understand what they were trying to tell us. We have groups in each region, at a local level, understanding what the team and the people are telling us, and then building that back into the initiatives that we're doing in those regions.” Aside from listening, Coca-Cola Amatil also endeavoured to educate. “Another initiative originally from Indonesia was our Supply Chain Training Academy. It’s about building technical capability at the base operator level right up to supervisors, and up-skilling the entire workforce over a 12 to 18 month period.”

In July 2019, PNG was awarded the Supply Chain Best Practise Award at the Coca Cola Asian Supply Chain Conference, in recognition of the transformation achieved in the first half of 2019, beating out over 20 bottlers including large bottlers from Japan, China and Australia.

Despite the challenges in a country such as PNG, technology has had a significant part to play in the transformation. Two complementary systems originally introduced in Indonesia were brought in, the Electronic Short Interval Control (ESIC), and the Quality Information System (Quinsys). “ESIC is a homegrown production control system which tracks line performance by the hour,” explains Robinson. “If we should have made 2000 cases, but we only made 1000, it will report the issues behind that on an hourly basis and allow us to track and address it.” Quinsys, meanwhile, is about auditing good manufacturing practice. “People can go around the plant and put into the system any hazards or issues that they find. It gives us a really good tool to manage our safety and quality.” Going live in January 2020 is a new ERP,  Microsoft Dynamics. Replacing existing legacy systems, Robinson is confident that “the new ERP system will make sure that everybody is working off of the same plan. By putting in Microsoft Dynamics we'll give ourselves an ERP system that will enable us to integrate all our data onto one platform, manage process compliance and sustainable change.”

There are also a few technologies with region-specific utility, particularly GPS trackers. “We essentially deliver everything in shipping containers, but after delivery, we tended to lose track of them and end up paying detention bills to the shipping companies,” says Robinson. “Now we’ve put trackers on all the containers so that we know whether they have reached the destination, which also enables us to track them all the way back.”

Another initiative was based around transforming relations with suppliers from transactional relationships to business partners. “Good examples of those improving supplier relationships are demonstrated by key suppliers such as Orora (cans) and BOC (Carbon Dioxide), where we were able to move from regular supply issues, due to poor planning and communication, to value added relationships where we are proactively working together to drive shared growth and cost efficiency through design innovation and joint long term planning,” says Robinson. “Labelmakers Group is our new label supplier, and brings innovative ecommerce and design capabilities, such as digital printing, which we are looking to exploit for our 2020 consumer promotional programs. In logistics we have consolidated our transport and shipping suppliers into companies such as Bismark (a local vessel cargo supplier) and East West Transport which is giving us better control, capacity and scaled efficiency to support our growth. On the production side we engaged our plant suppliers such as Krones to provide technical and engineering support to maximise output. These relationships were all instrumental in turning around performance.”

“In summary what we learnt is that frameworks like operational excellence can still drive total business performance,” says Robinson. “They are proven methodologies, replicable and low cost. Engagement and capability building, internally and externally, with suppliers was key to delivering sustainable improvement and using digitalisation and technology is important to deliver compliance and sustainability to the change.”

As for the future, the company is planning its next phase of supply chain improvements and investments to ensure its supply matches the voracious demand in the region. “It's hard to describe how important the Coca-Cola brand is to this market. Right now, we can sell every can of Coke we can make for the foreseeable future – it's just an amazingly popular PNG-made product.” 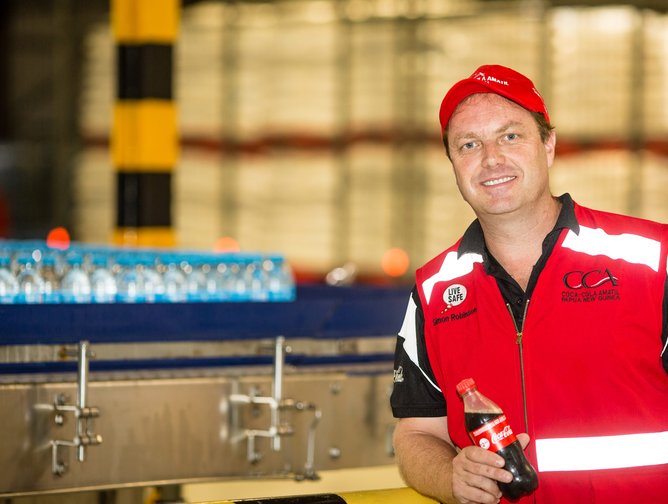 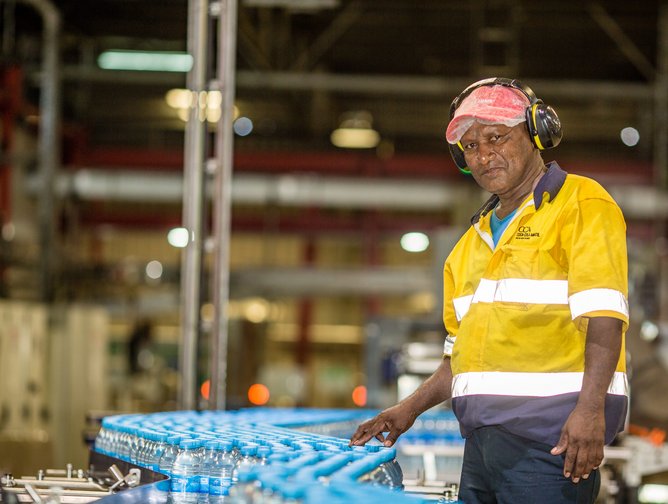 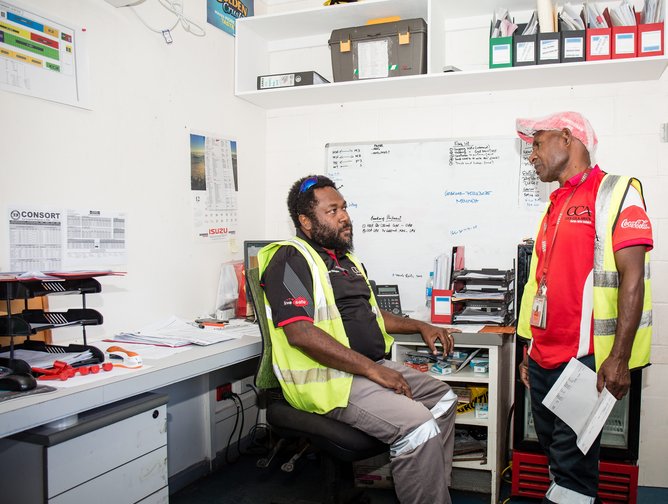 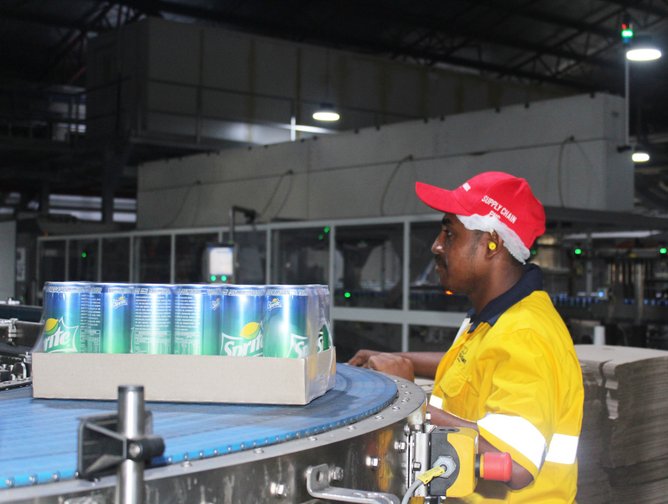 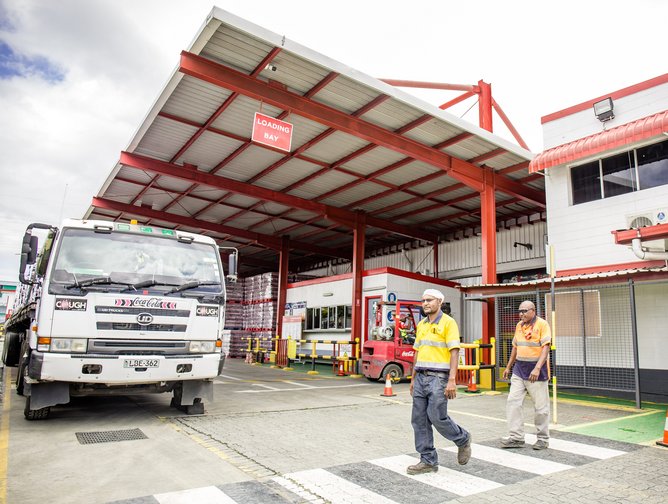 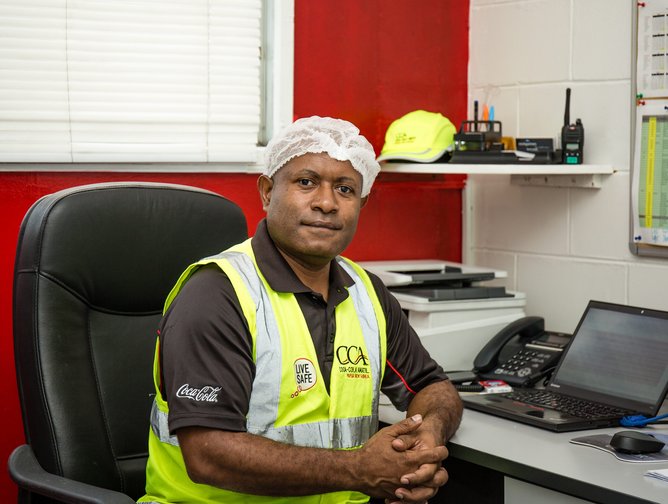 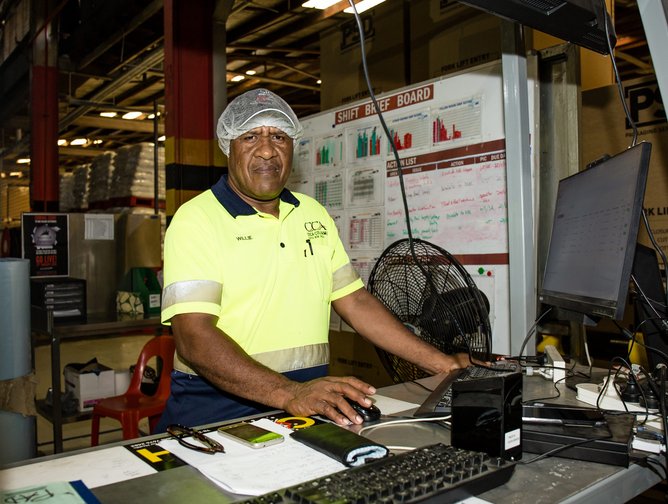