Canopy Growth Corporation (Canopy) was established in 2013 at Smiths Falls, Ontario as a grower, processor and producer of medical cannabis. Cannabis originates from India and Asia, where it’s been used for many thousands of years and is so widely used today that a history review is unnecessary. It’s only recently though that western medical science has started to accept the efficacy of cannabis in alleviating illnesses such as epilepsy, multiple sclerosis (MS) and muscular spasms as well as a host of other conditions, both physical and mental. Research and trialling will doubtless isolate and validate many new cannabinoid-based remedies. Of course its recreational use in many forms has been much more widely appreciated and for far longer!

The debate about legalising cannabis has rumbled on for decades, those in favour pointing out that it is less addictive or physically harmful than either tobacco or alcohol, those against arguing that it is a gateway to hard drugs. However that argument is pretty much lost: legalisation in many countries has generally been welcomed by enforcement agencies because it decoupled pot from the illegal drug trade controlled by criminals. Cannabis for recreational use was legalised by the Canadian government in October 2018, opening a completely new market opportunity to the already well-established industry leader Canopy Growth and its subsidiaries Tweed Inc (which grows the plants) and Spectrum Therapeutics (which supplies medical formulations).

Today, Canopy is the world’s biggest producer and distributor of cannabis and employs some 3,500 people. From growing sites all around Canada, some under glass producing up to five harvests a year, some in open fields yielding a single harvest, the bulk product is brought in armoured trailers to the processing and packing plant at Smiths Falls.

It was in the run-up to legalisation that Matthew Sly was appointed Logistics Director of the company. At that point the company employed just 150 people, he recalls, and had no formal logistics department. Until then it had been comparatively simple as all operations were out of a single site at Smiths Falls. But as acquisitions were made in other provinces, licensing and moving the cannabis became more complex and a supply chain professional was needed.

For him, the challenge facing Canopy called to mind how the first settlers moving westward across Canada must have felt over a century ago. “There was nobody to follow, no rear-view mirror: we were the leaders!” Legalisation presented so many unknowns, and though the core product was now legal, today’s product portfolio including edibles, vapes, beverages and concentrates had yet to be formulated for a completely new market. One big unknown was how large this new retail market might become: Canopy increased production and growing capacity at this time to meet expected demand but has since modified its approach: it aims to maintain its position as the world’s leading cannabis company but growth is being carefully matched to market demand as that becomes clearer.

Recreational shipments outstrip medical by a factor of around 10:1 in units, says Sly. “That is where the major part of our business now comes from.” And remember that this is a high value, rigidly regulated product requiring specialised handling. Brinks is the global leader in security bulk transfer of cash and securities for banks. Within a month of legalisation, Canopy signed an ongoing agreement with Brinks Canada to provide logistics for its domestic recreational distribution network. “We have a fleet of armoured tractor trailers that we use for all our deliveries. The value Brinks brings to us, and the network they provide, has made for a very successful partnership. We can have goods to the value of anything from CAD$5mn to CAD$20mn on a trailer, and this needs very specialised treatment because it not only has to be secure but also in temperature controlled and pharma-grade transports.” Brinks continues to be a key partner, and it’s not hard to understand why. Its CEO Douglas Pertz was excited by the tie-in with Canopy: he estimates the global cannabis industry to be worth around US$160bn: as finance is increasingly traded electronically, it’s not just producers like Canopy who will be the winners.

The recreational product is confined to Canada, the medical distribution is destined for Europe, Australia, and South America. Starting to export cannabis was quite challenging, Sly admits. “One of my first challenges was figuring out how to move cloned plants and cultures to other continents. Navigating the regulations around the movement of agricultural products is one thing, doing that with a controlled substance is another!” His first international shipment was to Germany to open up the Europe market. His second international shipment was to Australia which required special temperature and humidity-controlled shippers that were custom designed to make sure the cloned seedlings and cultures would not flower or come to harm in up to 36 hours of transit.

Part of Sly’s original brief was to set up a Canada-wide warehousing operation and he continues to help design all Canadian and global storage locations. Here the experience he’d had of running Walmart’s massive Canadian distribution facility equipped him for the daunting challenge. At the beginning of 2018 he was asked to plan and implement a recreational distribution network ready to capture a new and quite unknown demand. He had five months to buy a distribution center, set it up, work out the excise stamp requirements, and put contracts in place with carriers. This called for him to be very creative to cater for as yet unknown quantities, products and even destinations!

Back at the Smiths Falls distribution center, Canada’s rigorous excise stamp requirements were a further challenge – and in this case an opportunity to implement the reliability, flexibility, speed and data capture that only automated packing can really ensure. As with tobacco, cannabis producers have to obtain a licence from the Canada Revenue Agency (CRA) permitting them to buy excise stamps – and each province and territory’s stamp is differently coloured “Every unit we ship out has to carry an excise stamp: and they come without adhesive. So I worked with a partner called Plan Automation LP to develop custom excise stamping equipment and high speed packaging lines that allow us to pick and place these stamps, at rates from 100-300 units per minute, with the flexibility to accommodate all our different product types.”

There’s been a big automation programme at Canopy, he says, placing it ahead of its competitors in being able to respond to customer orders flexibly and fast. An order can be received, packaged, stamped with an excise stamp and dispatched within four hours for delivery anywhere in Canada by 8.00 am the following morning. Digital transformation is not achieved in isolation of course. Brinks for example has custom-designed its own systems so that Canopy can track exactly where its trucks are, what orders are on them and when they are delivered, with proof of delivery (POD) instantly relayed to Canopy triggering an automated bill. “Because of the complicated regulatory environment we work in we’ve had to automate a lot of our internal processes including documentation controls and transfer processes, to eliminate paperwork and transactional errors. We simply can’t have errors because we are required by Health Canada to account for every single gram. And we are introducing more production automation, for example robotic picking and packing of orders. The digital transformation of our industry is the one key thing that will enable us to grow and be more cost efficient.”

Flexibility and agility are qualities Sly has learned from experience, he says. He could have added a great deal of confidence, since many would have fled from some of the challenges he describes. With a CV verging on the picaresque, he has worked with construction equipment, high tech PCB manufacture, pharmaceutical products, English teaching, auto parts fulfillment (at a rate of 20,000 products a day) and large retail distribution. Now, he is truly working in a culture that suits his personality: Canopy, he notes, gives its people the autonomy they need to reach their potential to deliver value for themselves and the organisation – it is, he says, a fun environment for someone who thrives on change. “Logistics is the heart of the company: if the heart is not pumping properly everything will shut down.” 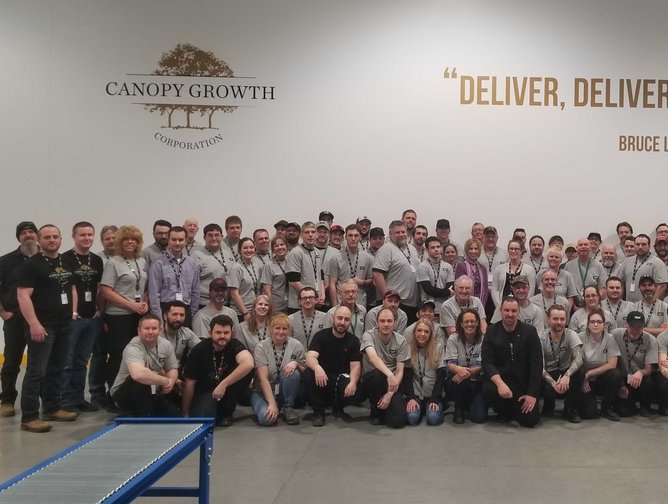 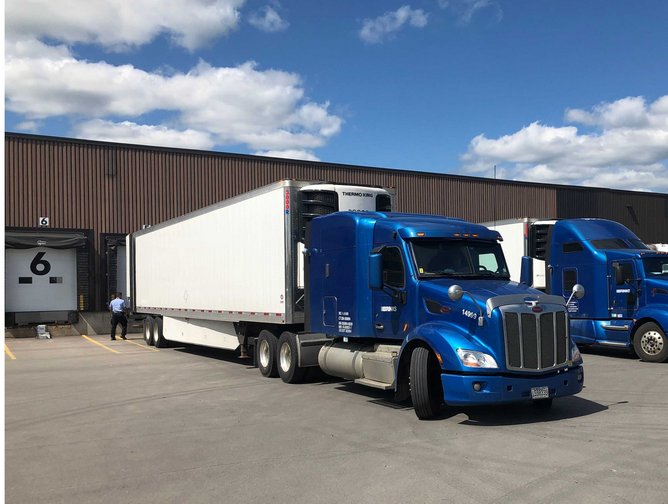 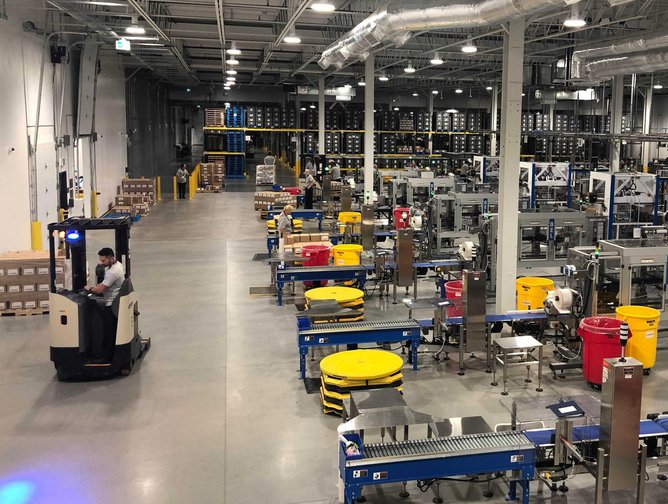 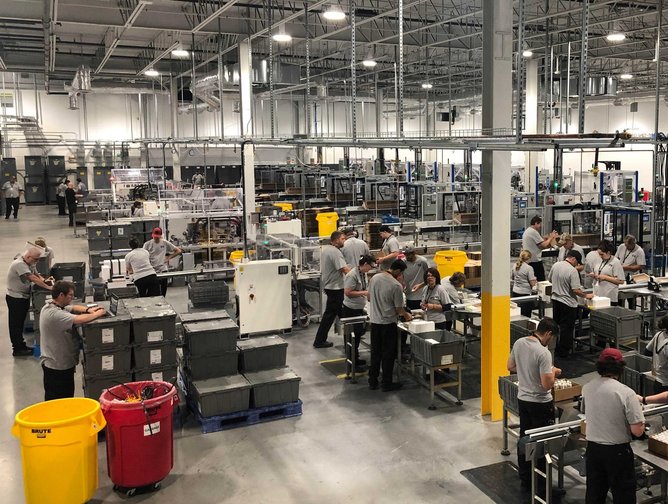