Every year, ACI publishes the World Airport Traffic Report. The 2012 edition, with detailed 2011 yearly data from more than 1,520 airports in 156 countries came to light in September 2012.

Although 2011 can best be characterized as a year plagued with economic uncertainty, natural disasters and sociopolitical upheaval, airport passenger traffic posted another record year. The world’s airports served more than 5.4 billion passengers in 2011. This is ongoing evidence of the sheer size of the global aviation market as well as the perseverance and importance of the industry as a whole.

Following the 2008-2009 Great Recession,the airport industry exhibited resilience by achieving two consecutive years of unwavering increases in passenger traffic. In 2011, was a year where growth took place in the context of natural disasters in East Asia, political and social unrest across the Middle East and Northern Africa as well as a debt crisis in the Eurozone. While this represents only a short list of the obstacles that could have potentially hindered the rise in demand for air transport, the industry still recorded a 5.3% year-over-year increase in passenger traffic in 2011. Retrospectively, 2011 could best be described as a year of environmental, social, socio-political and economic uncertainty. And while the apparent downside risks had very little aggregate level impact on passenger traffic, trade in air freight was less forgiving to the imminent jeopardy in the global economy.

In summary, the volume of worldwide cargo traffic, which is composed of air freight and mail, was almost flat at 0.2% annually. With the deterioration of business confidence, additional investments in order shipments and inventories curtailed in some regions thereby having an negative impact on international trade in air freight. Thus, even though in the long run, passenger traffic works in tandem with the overall business cycle, traffic in air freight is more sensitive to short run dynamics in the overall economic climate and industry outlook.While air freight began the year in positive territory in 2011, a sustained decline in growth rates was apparent from the month of May and thereafter as growth converged to zero percent in December 2011. While air freight was sidelined from an aggregate perspective for most of 2011, the results diverge on a comparative regional basis. Certain regions experienced gains in cargo traffic whereas other regions suffered from declines in freight volumes over the course of the year.

While there is tendency to focus on year-over-year growth patterns, it is also important to view airport traffic from a historical perspective. Global passenger numbers have increased by almost 46% since 2001 from 3.7 billion to 5.4 billion in 2011. Considering historic challenges, the industry has experienced a compounded annual growth rate of 4.1% over an 11 year period. This growth rate is remarkable considering the vast array of challenges that were confronted by the industry. Over the last decade the airport industry was at the epicentre of many key events that had a direct impact on air transport demand. Thus, the historical assessment of global traffic shows both the vulnerability of air transport to external economic shocks as well as the long run resilience of the industry as a whole.

Figure 1 shows an index of passenger and cargo traffic over time coupled with key events that impacted air transport. After adjusting for seasonality, negative shocks become quite apparent. While the 9-11 tragedy in 2001 and the Severe Acute Respiratory Syndrome (SARS) crisis in 2003 created immediate sharp declines in passenger traffic the 2008-2009 recession that was primarily triggered by the freeze in global credit, resulted in a more gradual and prolonged decline. The 9-11 attacks resulted in an overall year over year decrease of 15% in passenger traffic for the month of September 2001 recovering back to pre-9-11 levels in 2003.In the midst of the SARS outbreak, passenger traffic declined by over 5%.The Great Recession, starting December 2007 and ending June 2009, resulted in a 6% drop in overall figures during that period. Smaller disruptions such as the H5N1 Virus (Bird Flu) in 2006 and the volcanic ash clouds over Europe in 2010 are also clearly visible in the series.

As cargo traffic is linked to global trade, it has historically demonstrated a higher elasticity of demand, making it more sensitive to geopolitical events and risks in the economy. A closer look at the growth trends in cargo shows more volatility over time. Again, the most significant declines in growth rates are apparent during 9-11 and the two major recessions over the last decade. During September of 2001 (9-11), cargo traffic declined by 19% as compared with the previous year. In January 2009 at the bottoming out of the recession, cargo traffic contracted by as much as 21.5% compared with January 2008. Fortunately, this drawback was only temporary given that the industry was able to achieve pre-recession levels in cargo volumes in 2010 and 2011.

Despite the inherent uncertainty that was associated with 2011, monthly passenger traffic was relatively stable oscillating between 3% and 6% year over year throughout 2011. With the exception of an abnormally high growth rate in April 2011 as a result of the depressed passenger figures from the Icelandic volcanic eruption, which paralyzed European air space in April 2010, passenger traffic was relatively unfettered by global economic phenomena in 2011. Although, there were a number of airports that were adversely affected by events that transpired in 2011 the impact was buffered by robust growth in emerging markets. The combined effect of rising per capita income and demographic muscle make markets such as Brazil, Russia, India, China, Indonesia and other South East Asian markets fertile environments for robust demand in air travel.

Air travel can be characterized as a “normal good” (or more specifically a normal service). Conventional economic theory suggests that a “normal good” is any good (or service) that experiences an increase (or decrease) in demand for a given rise (or decrease) in income, keeping prices constant, and all other things being equal.  Since leisure and tourism figure prominently in understanding the general demand for air transport, the logic is that as incomes rise, so will demand for air transport services. Although air transport continues to expand despite a number of obstacles, a certain number of markets, particularly in developed economies, have reached a certain level of maturity with more modest growth. On the other hand, emerging markets are experiencing greater velocity with regards to the rise of per capita income with a corresponding rise in demand for air transport. Generally speaking, there is a positive correlation between Gross Domestic Product (GDP) on a per capita basis and passenger traffic. Although almost 84% of the world population resides in developing and emerging countries, these markets only make up 38% of global airport traffic. GDP mirrors the breakdown in passenger traffic since developing economies make up approximately 40% of world GDP. With the demographic clout of many emerging markets, it is only a matter a time before these markets gain a greater share of world output. Because of the multiplier effects stemming from a generation of economic wealth and the overall interrelationship with the local and national economies, an airport’s output is linked to the overall economies output (see Box 1 for Airport Output Indicators).

Figure 2 depicts the relationship between income on a per capita basis with traffic propensity relative to the population[1] for a given country. While there is no evidence of a perfectly positive correlation between the variables, it can be easily deduced that as the economy expands so does passenger traffic relative to the national population. Using a different perspective, it is also evident that economic growth and passenger traffic growth work in tandem. Figure 3 illustrates this point by comparing growth rates between the overall economy and growth rates in passenger traffic for major economies. This notion was investigated in the earlier sections when a historical perspective on traffic trends was presented. It shows the robust performance of BRIC economies (Brazil, Russian Federation, China and India), which represent more than 40% of the world’s population and 25% of global output. These emerging markets are among the global leaders for growth in passenger traffic as well as GDP. The other burgeoning markets such as Turkey and the South East Asian markets of Indonesia, Thailand, and Malaysia all recorded exceptional year-over-year passenger growth in 2011.

During the first five months of 2012, there was a very marked difference between the evolution of passenger and cargo traffic. By the end of May 2012, passenger figures continued to rise but just below 5%, with international traffic growing faster than domestic traffic at 6% and 4% respectively. The fastest growing region is the Middle East, followed by Asia Pacific and Africa. Not surprisingly, the uncertain economic situation in Europe and North America resulted in these two regions having the lowest passenger growth, with rates below 3%.

Cargo and freight volumes were showing clear signs of a troubled international economy, with tonnage almost 2% below 2010 volumes for the first five months of the year. The biggest drop in cargo traffic was in Europe, with a decline of almost 5%, followed by Asia Pacific with traffic 1.5% below 2010. The only regions showing modest growth were the Middle East and Latin America, both achieving rates of just above 3% and driven only by international traffic.

During the second quarter of 2012 the international economy exhibited signs of further weakness. The International Monetary Fund (IMF) predicts further deterioration in the global economy, mainly as a result of the continuing financial problems in Europe and slower-than-expected growth in emerging economies. According to its July report, the global economy is projected to grow at 3.5% in 2012 and 3.9% in 2013. Although there was a downgrade in growth projections for all world regions, there is still a marked difference between the advanced and emerging/developing economies, of more than 5 percentage points.

The traffic outlook for 2012 is not encouraging. Although passenger traffic in 2012 is expected to grow, the significant slow-down of the economies in the BRIC countries, together with the continued economic troubles in Europe and the United States, means that the growth rate will be at less than 5%. Cargo traffic is expected to show a decline with respect to 2011 levels, mainly driven by the low business and consumer confidence in the largest international economies. 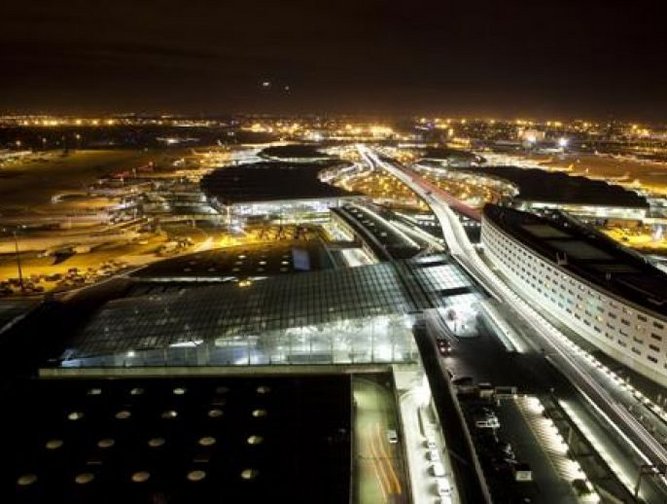 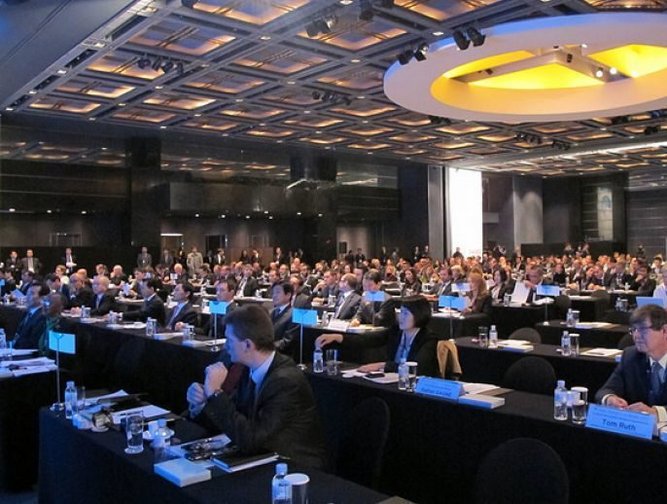 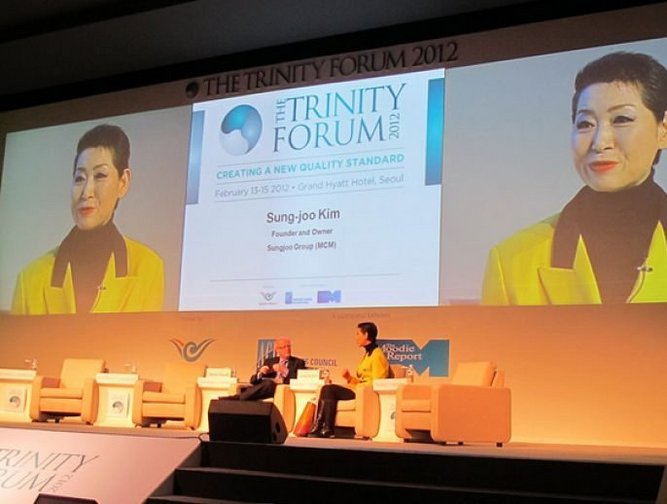